Well 2d ago, Prabhakar Alok founded a very good post from Ramesh Kumar’s Linkedin wall. So, He Decided to merge these answers and people can read easily. 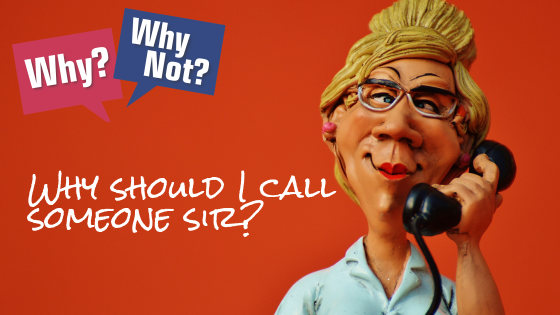 So, the Questions arises from Ramesh Kumar is Why do I address someone, sir? Ramesh shared his experience too and said that I studied in an engineering College and every senior was a ‘Sir’. We never thought about it just as a word. Every senior was a ‘sir’ and we respected them whether they are smart or illogical. It was complete and unconditional respect. Even today, I address my seniors of college as ‘sir’ and all my juniors call me ‘sir’! At work, I address all those elders to be a ‘sir’. Boss, younger to me, wants us to call by his name.

We do it and sometimes I use ‘Sir Ji’ I address all Professors, Armed forced personnel and senior IAS officers as Sir, irrespective of their age. For me, the profession, the person’s achievements are of prime importance. If a person is elder to me and has achieved a lot, he is a ‘sir’ to me. I met a person with tremendous knowledge and I called him sir and he asked me not to call him sir/ boss, but only by his name. I am uncomfortable calling by his name, yet, I respect and do not use his name or sir or boss. Difficult. But, I am trying! I appreciate successful businessmen. But, they are never ‘sir’ to me. Generally, all elders are ‘sirs’. But, sometimes, we may address a customer ‘sir’, out of respect to satisfy their egos but not with feeling.

Whom do you address ‘sir’, if you do? 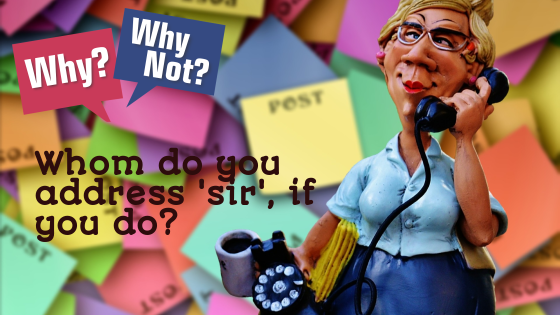 well..!! People came up with different opinions when the question arises. Some of the opinions were as follows:-

In the banking world with a global presence I cannot imagine myself calling people as sir or mam nor in a multinational organization but other organisations ,if someone whom I not too familiar with does not specifically inform/request me to address them by their first or last name I continue to address them with the stated title. – Sulochana Amin,  then Ramesh Kumar replied, ” I find it safe to address Indian counterparts as sir or mam ” — so true.   In that situation, it is not respect..it is just a word! In Reply Sulochana again said Ramesh Kumar yep.. true.. the usage of the title cannot conform respect .. I will still respect a person even without using the title and vice versa .. I don’t find the correlation between the two words.

Go On, Disclose to Us What You Think!

Did we miss something? Go ahead! Reveal to us what you think about our article on “Why should I call someone Sir” in the remarks segment.